Lokma is a traditional Turkish and Turkish Cypriot dessert made of flour, sugar, yeast and salt bathed with syrup or honey. Lokma was first cooked by the sultan’s cooks at Ottoman Empire palaces, and for centuries, it was unknown how it was made. After the 20th century, it became a tradition for Turks to cook and serve lokmas to neighbours and passengers. 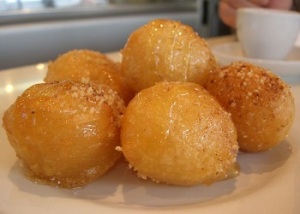 Various other kinds of fried dough with syrup are found in the Mediterranean, the Middle East, and South Asia, from the Italian struffoli (the most similar in preparation to Lokma) and zeppole (more like an American cake doughnut) to the Indian and Pakistani jalebi and gulab jamun.

Perhaps the oldest documentation of a related but not identical dish is in the tomb of Ramses IV, where something more like jalebi is shown being prepared. Later, the Ancient Greek enchytoi consisted of a cheese-and-flour dough squeezed into hot fat, then covered with honey.

–      Add potatoes to the rest of the ingredients and knead with the lukewarm water to make a batter.

–      Stand for about an hour in a warm place. The batter will increase in size.

–      Drop dessertspoons of mixture into hot oil, dipping the spoon into cold water each time before dipping into batter, so that batter will not stick to the spoon.

–      Fry until golden brown, drain on absorbent paper and then dip Lokma in syrup for a few seconds.

–      Using a slotted spoon, remove from syrup and transfer to a bowl.

–      Combine all the ingredients is a saucepan.

–      Stir until sugar is dissolved and boil for 5 minutes. Allow to cool.