I have been asked many times about the game of rugby union by all nationalities.

Therefore, and prior to the world cup to be held in Great Briton Sep-Oct this year, I thought it may be a good idea to serialise the game beginning with the history.

The history of rugby union follows from various football games played long before the 19th century, but it was not until the middle of that century that rules were formulated and codified. The code of football later known as rugby union can be traced to three events: the first set of written rules in 1845, the Blackheath Club’s decision to leave the Football Association in 1863 and the formation of the Rugby Football Union in 1871. The code was originally known simply as “rugby football”. It was not until a schism in 1895, over the payment of players, which resulted in the formation of the separate code of rugby league, that the name “rugby union” was used to differentiate the original rugby code. For most of its history, rugby was a strictly amateur football code, and the sport’s administrators frequently imposed bans and restrictions on players who they viewed as professional. It was not until 1995 that rugby union was declared an “open” game, and thus professionalism was sanctioned by the code’s governing body — the International Rugby Board.

The formation of the first Rugby Union

On 4th December 1870, Edwin Ash of Richmond and Benjamin Burns of Blackheath published a letter in The Times suggesting that “those who play the rugby-type game should meet to form a code of practice as various clubs play to rules which differ from others, which makes the game difficult to play”. On 26 January 1871, a meeting attended by representatives from 21 clubs was held in London at the Pall Mall restaurant.

Richmond, St Paul’s, Wellington College, West Kent, and Wimbledon Hornets. The one notable omission was the Wasps who “In true rugby fashion … turned up at the wrong pub, on the wrong day, at the wrong time and so forfeited their right to be called Founder Members”.

As a result of this meeting, the Rugby Football Union (RFU) was founded. Algernon Rutter was elected as the first president of the RFU and Edwin Ash was elected as treasurer. Three lawyers, who were Rugby School alumni (Rutter, Holmes and L.J. Maton), drew up the first laws of the game; these were approved in June 1871.

The first international football game resulted from a challenge issued in the sporting weekly Bell’s Weekly on 8 December 1870 and signed by the captains of five Scottish clubs, inviting any team “selected from the whole of England” to a 20-a-side game to be played under the Rugby rules. The game was played at Raeburn Place, Edinburgh, the home ground of Edinburgh Academicals, on 27 March 1871. 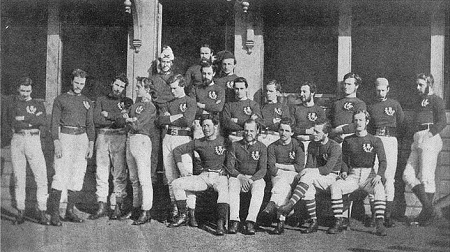 This is not only the first international rugby match, but the first international of any form of football because, despite the fact that three England vs Scotland fixtures had already been played according to Association Football rules at The Oval, London, in 1870 and 1871, these are not considered full internationals by FIFA as the players competing in the Scotland team were London-based players who claimed a Scottish family connection rather than being truly Scottish players.

The English team wore all white with a red rose on their shirts and the Scots wore brown shirts with a thistle and white cricket flannels. The England team was captained by Frederick Stokes of Blackheath,

that representing Scotland was led by Francis Moncrieff; the umpire was Hely Hutchinson Almond, headmaster of Loretto College.

The game, played over two halves, each of 50 minutes, was won by Scotland, who scored a goal with a successful conversion kick after grounding the ball over the goal line (permitting them to ‘try’ to kick a goal). Both sides achieved a further ‘try’ each, but failed to convert them to goals as the kicks were missed. Angus Buchanan of Royal High School FP and Edinburgh University RFC was the first man to score a try in international rugby.

In a return match at the Kennington Oval, London, in 1872, England were the winners.