1. Turkey’s biggest city Istanbul had been the capital of three of the world’s great empires: the Roman empire, the Byzantine empire, and the Ottoman empire.

3. St. Nicholas, the inspiration for Santa Claus, was born in Patara, Turkey. He was a historic 4th-century Christian saint and Greek Bishop of Myra/Demre, which is situated on the country’s Mediterranean Coast. 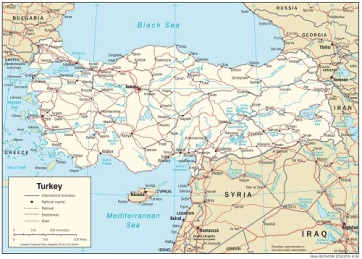 5. Istanbul is the only city in the world that is located on two continents: Europe and Asia.

6. Turkey is the first world hazelnut producer and exporter, with approximately 70% and 82% of the world`s production and export respectively.

7. Antakya/Hatay near the Turkish-Syrian border (then known as Antioch) is home to the Cave Church of St. Peter or the Grotto of St. Peter, where many believe Christianity was born as a religion and one of the pilgrimage destinations for Christians. The Church is a cave carved into the mountainside on Mount Starius. The Church’s stone facade was built by Crusaders who ruled Antioch between 1098 AD to 1268 AD.

8. Efes is the beer of Turkey. Efes Beverage Group is the largest producer of beer in Turkey with approximately 80% market share and ranked 12 in the world beer market.

9. Once a loved symbol of nationality and a special badge of the Turks, the Fez which was worn by men and women, even if not a Moslem, is hardly seen these days. The Fez was banned on 30 August 1925 and by the 1930s it was almost gone in Turkey.

10. The current 29-letter Turkish alphabet was established as a personal initiative of the founder of the Turkish Republic, Mustafa Kemal Atatürk in the 1920s. Turkish was written using a Turkish form of the Arabic script for over a thousand years before.

11. Tulips do not originate from the Netherlands as most people believe. It was a wild flower growing in Central Asia that was cultivated by the Turks as early as 1000 AD. The flower found its way to Western Europe and the Netherlands only in the 17th century.

12. The Anatolian peninsula or Asian Turkey, is one of the oldest permanently occupied regions in the world. European Turkey, called Eastern Thrace, has also been inhabited since 40,000 years ago, and is known to have been in the Neolithic era by about 6000 BC.

13. The famous Trojan Wars took place in Western Turkey, a wooden statue of the Trojan Horse sits on the site today.

14. Julius Caesar’s famous words, “Veni, vidi, vici” (which mean “I came, I saw, I conquered”), were uttered after he won the difficult battle against the kingdom of Pontus, which is located in Northeastern Turkey.

15. Football is the most popular sport in Turkey. Galatasaray won the UEFA Cup and UEFA Super Cup in 2000. The Turkish national team finished 3rd in the 2002 FIFA World Cup Finals. Istanbul has 3 famous football clubs: Galatasaray, Fenerbahce and Besiktas.

16. Göbekli Tepe at the top of a mountain ridge in the Southeastern Anatolia Region of Turkey is the world’s oldest known example of monumental architecture dating some 11,600 years old. It also contains the oldest known temple. 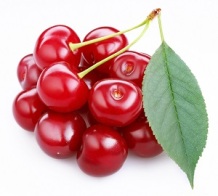 17. Cherries were introduced to Rome from the Anatolian region, of what is now Turkey, since 72 BC.

18. It was in 640 BC when coins made of electrum were utilized for the first time in history, namely by King Croesus in Sardis, Turkey.

19. Turkey is home to 2 of the 7 Wonders of the Ancient World. The Temple of Artemis at Ephesus is near Izmir, and the Mausoleum of Halicarnassus is in Bodrum. The Wonders originated during the Greek era in 2nd century BC.

20. The Turkish Delight or Rahat Lokum is one of the oldest sweets in the world with history dating back 500 years. Napoleon and Winston Churchill’s favorites were the ones with pistachio filling, and Picasso used to consume it daily while working.

21. Turkey’s Çatalhöyük is one of the first urban centers in the world (at 7500 BC to 5700 BC) with wall paintings and mural art that provides a direct window into life 9,000 years ago. It is also internationally important for the understanding of the origins of agriculture and civilization.

23. The Aşure or Noah’s Pudding is a Turkish dessert said to originate from Noah’s family. It is claimed that when Noah’s Ark came to rest on Mount Ararat, Noah’s family celebrated with this special dish consisting of grains, fruits and nuts.

24. The world’s first underground mosque is constructed in Turkey’s Büyükcekmece district in Istanbul. Built 7 meters beneath the surface, Sancaklar Mosque was inspired by the Cave of Hira and the building won 1st place in the World Architecture Fest competition for religious places.

25. Turkey has 11 heritages on the UNESCO World Heritage List as of 2012. They include the Archaeological Site of Troy, City of Safranbolu, Great Mosque and Hospital of Divriği, Hattusha – the Hittite Capital, Historic Areas of Istanbul, Nemrut Dağ, Neolithic Site of Çatalhöyük, Selimiye Mosque and its Social Complex, and Xanthos-Letoon. 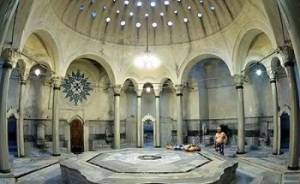 26. Turkish baths or hammams were an export of the Roman Empire to Turkey in the 7th Century, derived in part from Roman and Byzantine baths.

28. The 7 Churches of Apocalypse are all situated in the Aegean region of Anatolia – Ephesus, Smyrna (Izmir), Pergamum, Thyatira (Nazilli), Sardis, Philadelphia (Alasehir) and Laodicea. 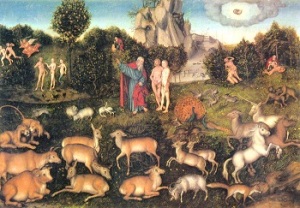 29. In the Book of Genesis, it is said that the Garden of Eden was watered by a river that split into four streams as it went beyond the garden. Two of these streams are believed to be those that rise from the mountains of the eastern part of Turkey, namely Tigris (or Dicle) and Euphrates (or Firat).

31. Turkey is the birthplace of the following popular historical figures: the biblical Abraham, the poet Homer, St. Paul the Apostle, the storyteller Aesop, and the “Father of History” Herodotus (first conferred by Cicero). 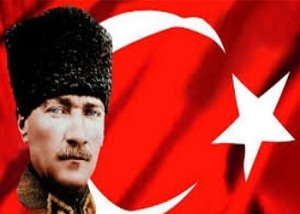 32. 623 years of Ottoman rule was abolished and the newly formed “Republic of Turkey” was officially proclaimed on 29 October 1923 in Ankara. Mustafa Kemal became the republic’s first President and was bestowed the honorific surname “Atatürk” (Father of the Turks).

33. Mustafa Kemal Atatürk was actually born in Greece. The founder of modern Turkey was born in 1881 in what was then the Ottoman city of Selanik, now Thessaloniki, Greece’s 2nd biggest city.

34. The typical Greek dish of Moussaka originated in Turkey. 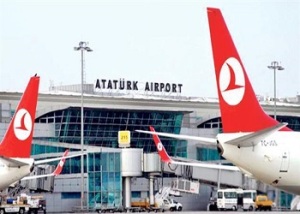 35. Turkish Airlines flies to 245 destinations in 105 countries across 4 continents, making it the 4th in the world by number of destinations.

37. Turkey is ranked the 6th most popular tourism destination in the world with 35.5 million foreign visitors in 2012.

38. Alexander the Great cut the Gordian knot near Ankara. The double knotting technique used in Turkish rugs is also called as Gordian Knot.

39. Istanbul has the historical building of Sirkeci Train Station. This was the last stop of the Simplon-Orient Express – “king of trains and train of kings” – between Paris and Constantinople (Istanbul) from 1883 to 1977. Agatha Christie was one of the passengers of this famous train.

40. Turkey is noted for having one of the three most famous and distinctive traditional cuisines in the world.

41. Writing was first used by people in ancient Anatolia. The first clay tablets in the ruins of Assyrian Karum (Merchant Colony) date back to 1950 B.C.

43. There are eight countries that share a border with Turkey: Armenia, Azerbaijan, Iran, Iraq, Syria, Bulgaria, Greece and Georgia. 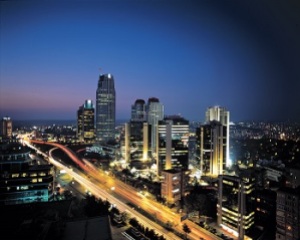 45. Istanbul is the largest city in Turkey and is the third most populous urban area in Europe. But it is not the capital, Ankara is in fact the capital of Turkey.

47. Turkey has a strong manufacturing sector, it makes and exports cars, planes, electronics, clothing and textiles.

48. Because of its location on top of a number of continental shelf boundaries Turkey is prone to earthquakes especially in the North of the country.

49. The patron Saint of England, otherwise known as St George also originated from Turkey. He was born in an area known as Cappadocia and later lived in Palestine. He was a Roman soldier, objected to the persecution of Christians by the Romans.

50. Finally it´s interesting to know that Turkey is also classed as being one of the few countries in the world that is self-sufficient. If all trade with other countries was suddenly cut, people would still be able to drink and eat most varieties of food as well as have access to fuel and energy.