I came in contact with Akincilar/Lurucina (Greek Cypriot name: Louroujina) for the first time in my life through our TFR members Chris Elliott and Margaret Sheard. They were, due to the work for their website cyprusscene.com, in contact with Raziye Kocaismail, founder of the association “Help Those With Cancer – TULIPS”.

Raziye was born in Akincilar and the roots of her family lie in this area since a long time.

But what is so special about this village?

Firstly, the geographical location. Akincilar is located – since the separation of Cyprus in 1974 into the northern part of TRNC (Turkish Republic of Northern Cyprus) and the southern part of RoC (Republic of Cyprus) – as an enclave near the Ercan (Lefkosia) airport, surrounded by an UN buffer zone and southern Cypriot villages. And still accessible only through a Turkish military base. Except the villagers themselves, their relatives and invited guests, no one has access.

Secondly, the history of the village. It was, until the separation of Cyprus, a mixed community of Greek and Turkish Cypriots. Quote of a former article: „Many people from Akincilar until recently believed they either originated from the Venetian Latin’s and had converted to Islam, while a few suspected that they were of Greek origins and had converted, in order to benefit from a lower tax system for Muslims. Therefore Lurucina was considered to be a stronghold of the ‘Linobambaki’ (cotton woollies). The term was a kind of insult to indicate that the people changed their identity depending on what suited their interest.“ Indeed, to date most of the villagers still speek both Turkish and Greek language. But they definitely feel like Turkish Cypriots!

We have written and published a lot about the history of the village during the last year. Therefore, anyone who would like to learn more about the history of Akincilar, should click one of the following links: Looking back in Time or The Exodus from the Village or Families of Lurucina!

Already last year, the Foreign Residents in the TRNC (TFR) had done a trip to Akincilar. The interest of the participants was so great that we decided to repeat this event in 2014. 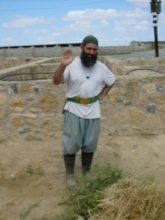 So, 29 members of the TFR came to the agreed meeting place last Sunday, where Raziye already waited for us with two TULIPS-mini buses. The trip was relaxed, the Sergeant on Duty at the Turkish military base was very friendly and helpful, and so the group could drive on to its first destination for the day, the small mosque of Kirklar Türbesi. I will not go into detail about this place at this point of my report, because we have previously reported extensively about the little mosque and except for the Imam nothing has changed there…(to remember – click here!).

After that stop we went on to the end point of our trip, Akincilar.

As always Raziye entertained the participants of the trip with her stories about the village, which gave a fascinating insight into the recent history of Cyprus. And this history was anything but amusing for the Turkish Cypriot villagers in the 50s, 60s and early 70s of the last century due to the atrocities of the Greek Cypriot EOKA terrorists and the harassment of the (as well Greek Cypriot) police!

Despite this historical fact all the remaining inhabitants of Akincilar have lost nothing of their hospitality. 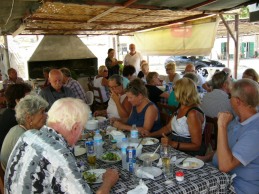 The people received us in a very friendly manner, invited our group even to their homes! Imagine! On a peaceful Sunday morning 29 strangers walk through your house unannounced? Who among us would really like this…?

The TFR members were all obviously impressed by the impressions they could collect, and the following outdoor lunch with delicious Küp Kebap (Kleftiko), traditionally cooked in a clay oven and prepared with fresh ingredients from the village, let me look into many happy faces in the end!

Also happy was Raziye Kocaismail – who assured me she rarely had hosted such a friendly group of visitors before – now receiving „on top“ an extra donation from the TFR for her cancer aid association from the surplus of our last Christmas party in 2013!

After lunch Raziye showed us her parents´house, that, in her childhood, was also the village’s “supermarket”. The house is maintained lovingly and full of old memorabilia and therefore gives vivid impressions of earlier times.

I am sure that a next year´s trip to Akincilar will be fixed to our schedule!

To view more pictures of the trip – please click here!