My great friend Suzee Moore, invited me to join her parents and a group of her friends on 27th September 2016 for a day trip to the Karpaz (aka Karpasia).

The last time went up there was in 2005, when Alistair and I first visited the Turkish Republic of Northern Cyprus (TRNC)

The day dawned clear and bright. The weather, at this time of the year is glorious, the scorchingly hot days of the summer having departed!

Started with a comment on my Facebook page: “Exciting day ahead for me! A trip, in a minibus, to the Karpaz for lunch with Suzee Moore and friends! Haven’t been there since 2005, so expect to see many changes!”

Suzee had hired a minibus and sold tickets to a group of friends (nine of us in total). Her parents, Geoff and Dorothea, were on their annual holiday to visit her and Suzee thought it would be a great day out for them.

The coach picked me up at the Erdener Supermarket at about 09.45 and about two hours later we got to the “Restaurant at the end of the universe!” (quoting from the spin-off book from “The Hitchhiker’s Guide to the Galaxy” by Douglas Adams) aka “Sea Bird Restaurant” which is on the tip of the island. 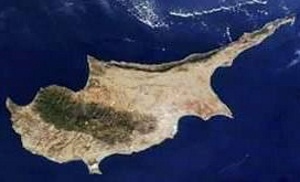 Looking at the photo of Cyprus (taken from space in 2016) we were completely at the end of the tip on the right hand side!

As we drove along I was lucky enough to have been given the front seat, next to the driver, as Suzee knew I wanted to take photos for this blog! The empty road stretched ahead with spectacular views of mountains, sea and wonderful strata in the rocks showing where the road had been cut through. Biggest difference in the 11 years since my last trip was the vast improvement in the road! The journey only took about two hours as compared to much longer, involving an overnight stay to break the journey!

Along the way we saw several flocks of migrating birds in their wonderful V formations. Sue told us she spotted some pink pigs, according to Suzee the monastery used to have black pigs, (better colour for a hot country as they don’t get sunburnt) about 18 years ago.

I was hoping that we would see some of the feral donkeys and when we drove through Dikarpaz village the driver stopped, so Cath could buy some carrots for them.

The area for the feral donkeys is protected and there are cattle grids across the roads to keep them enclosed in the area at the tip of the island. We saw several groups in the fields, as we drove along, with cries of “donkeys” filling the minibus!

Eventually we came across a small group on the road, another tourist car was coming towards us! Soon the donkeys were being fed carrots and apples by all the excited tourists (and our group) with many photos being taken. The driver implied that the tourists have to “pay” a toll of carrots or apples to pass them, which caused hilarity!

The Sea Bird restaurant is in a beautiful area with beaches on each side of the promontory.

We were a group of nine

We had a fabulous meal with everyone enjoying their choices, Dorothea and I really enjoyed our prawns.

Bob, I have to say, was a true “superstar” as he assisted those of us, not as fit as we were, on and off the minibus, to and from the lavatories etc!

We drove on and, as we passed the famous Golden Beach, I asked the driver to stop so I could take the photo. This is a beautifully unspoilt beach, which stretches for miles!

We went onto the Big Sands bar, there were several swimmers enjoying the sea! Most of us either enjoyed a glass of wine or a Magnum choc ice.

The picture shows the group having their orders taken by the owner of Big Sands who spoke such good English I suspected that he might not be a Turkish Cypriot!

We had an uneventful trip back to Girne / Kyrenia and I was home by 17.15 having thoroughly enjoyed the day!

The Sea Bird has bungalows, so may well take advantage and spend a night up there in the future.