Anastasiades says 2016 would be

a “crucial year” for the island

The president of [South] Cyprus has voiced cautious hope that a deal to end 40 years of division on the island could be signed this year, but said vital issues including the withdrawal of Turkish troops were still to be resolved. 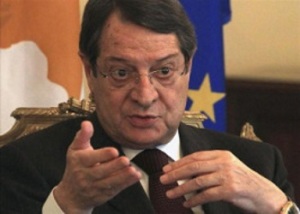 Nicos Anastasiades, leader of the internationally recognised Greek Cypriot government, told the Financial Times that 2016 would be a “crucial year” for the island. As long as there was sufficient progress on issues such as territorial adjustments, security guarantees and troop withdrawals then “I do expect we could find a solution within this year”.

“In the event of a solution, Cyprus would be a model for coexistence between Muslims and Christians,” he added.

The president and Mustafa Akinci, his Turkish Cypriot counterpart, have held 20 rounds of talks since May and made enough progress to raise hopes in the international community that this is the best chance of solving the dispute since Cyprus’s shared system of government broke down in 1963-64.

Cyprus has been divided into a Greek Cypriot-populated south and a Turkish Cypriot-populated north, backed by an occupying Turkish military, since Turkey invaded the island in 1974 following a Greek-inspired coup aimed at uniting Cyprus with Greece.

Mr Anastasiades was emphatic that no deal was possible unless Turkey withdrew its forces, and unless Cyprus’s security was based on EU membership and UN Security Council support, rather than the guarantees of outside powers.

When Cyprus won independence from Britain in 1960, it had to accept Greece, Turkey and the UK as guarantors of its internal power arrangements — a formula that manifestly failed.

“We have heard positive rhetoric from Turkey, but it remains to be found out whether Turkey means business when it comes to withdrawing troops, supporting territorial adjustments and realising that we are going to build an independent state that is not in any way a protectorate of any third country,” the president said.

Territorial adjustments were such a core issue in the talks that the two leaders had not yet discussed them in fine detail, he added.

However, it has been generally accepted that the Turkish Cypriots, who control 36 per cent of the island’s territory, will have to give up some of that in any settlement.

“The most important thing is to speed up the negotiations. In between, we can cultivate a climate of confidence and overcome the mistrust that we must admit still exists between the two communities,” said Mr Anastasiades.

He estimated that the present talks stood a better chance of success than a 2004 proposal, dubbed the Annan plan after Kofi Annan, then UN secretary-general. Turkish Cypriots approved that plan in a referendum, but Greek Cypriots rejected it by a crushing three-to-one margin.

“The Annan plan felt like a plan imposed by third parties. A plan is more authentic if it comes from Cypriots themselves,” Mr Anastasiades said, praising Espen Barth Eide, the UN envoy, for co-ordinating his talks with Mr Akinci but not intervening in them.

“What is most important is that there is a good understanding between the two of us,” Mr Anastasiades said of himself and Mr Akinci.

The two leaders have made most progress on how they would share power in what would be a new bicommunal and bizonal Cypriot federation, on the nature of the future state’s legislative and judicial institutions and on the political equality of the two communities.

This last issue is particularly sensitive for Turkish Cypriots, who for decades have feared that they risk bring swamped in a new federation by the overwhelming demographic and economic weight of the Greek Cypriots.

The latter outnumbered the Turkish Cypriots by four to one in 1974, and a similar balance will be maintained only if some of the thousands of settlers from Turkey’s Anatolian heartland who have arrived since 1974 are allowed to stay.

Seeking to reassure Turkish Cypriots, Ioannis Kasoulides, [South] Cyprus’s foreign minister, said in a separate interview: “There is no intention on the Greek Cypriot side to transform the north by means of population and property ownership.”

Property issues are especially difficult to sort out, largely because many Greek Cypriots who fled the north in 1974 abandoned their homes and businesses, which were subsequently taken over by Turkish Cypriots and Anatolian Turks.

But Mr Anastasiades said he and Mr Akinci had made progress on property matters by agreeing that a tribunal would adjudge individual cases according to categories including full reinstatement, partial reinstatement, exchange of properties, compensation and offers of alternative properties.