My show covering the 52nd year anniversary of BRTK was a privilege and honour to produce and featured old recordings as well as showing the modern day face of the Corporation.

Bayrak Radio started its life on 25th December 1963 in the garage of a house using car batteries which gave a coverage of 2.5km and was essential for the Turkish Cypriots to share news during the Cyprus troubles at that time and by February 1964 there was transmission to all of the island.  Bayrak Radio was formed into a Corporation in 1976 with equipment brought in from Turkey and its new identity was with radio and television.   In December 1977 BRTK made its first FM broadcast and in July 1979 the first colour TV broadcast.  Also in 1979 a powerful link was made between Lefkoşa and Ankara.

Another milestone for BRTK was the TV showing of the Declaration of the Turkish Republic of Northern Cyprus in 1983 by Rauf Denktaş.

Today BRTK has become very strong with 2 TV channels and 6 radio stations and, with the benefit of the internet, programmes can be accessed by people overseas.

I took the opportunity of interviewing some of the BRTK staff.

Left to right Engin and friends at BRT 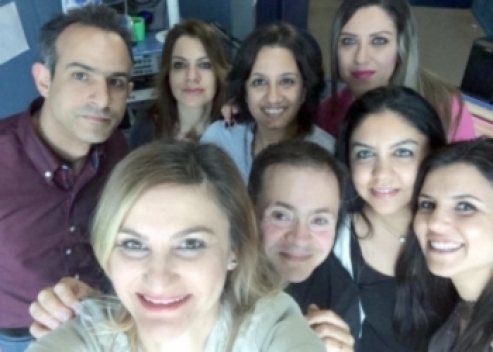 Firstly I spoke to Fatoş Baykal who started with BRTK in 1989 in radio and then moved to TV.  Fatoş said she has seen a lot of changes over the years and nowadays everything is so much easier with modern technology.

Nevra Çaglar joined the Corporation over 20 years ago when she was 20 years old. She is currently responsible for music programmes and Cinemania where she reports on films.  With 2 sons to look after she doesn’t have a lot of spare time but she tries to follow her hobbies of walking, cycling and reading.

I then spoke to Can Gazi who has been with BRTK for 21 years and he started as an English speaking DJ with a music telephone request program.  Of course everyone will appreciate how Can has moved on over the years and his current programmes include Northern Exposure, The Breakfast Show, Take Five, plus his TV show “A Cup of Conversation”.  Some years ago Can did outside broadcast work with Faces and Places.

In between interviews there were many screenshots of BRTK both old and new which emphasises the progress which has been made by the Corporation since those early days with the huge building which now houses BRTK and the state of the art equipment being used.

My next guest is Fatoş’ş sister, Zehra Özkan who started with BRTK in 1992.   Zehra is better known as DJ Zel who has a very romantic nature and writes poetry and she treated us by reciting her favourite poem “Dreaming”.  Zehra’s first programme with BRTK was Back in Time and in 1997 she worked with Can Gazi on the TV program Faces and Places.

Lastly, I spoke with Gűlin Taşt who joined BRTK in 1986 and her current programme is Diva on the Mike.  Gűlin said she used to give health tips and she is very interested in this aspect, especially anti-aging.   For 10 years Gűlin was a TV newscaster but she moved to radio as she felt she could be more creative in this field.

This was a very special show for me and I enjoyed putting it together and speaking with some of the staff members of BRTK.   Going by the length of time a lot of the staff have worked for BRTK, I would think they are all very happy in their work and long may they continue to do so for the enjoyment of the listeners and viewers and I hope you enjoy the video review you can watch when you follow the link below. 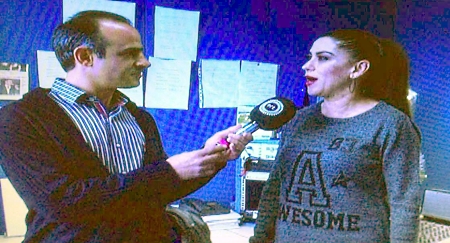 My interview will be screened on  Sunday 27th December at 12.30 noon and it will be repeated on Wednesday 30th December at 11.00am so do tune in to join me on  my show, Vox Pop on BRT2 Television.

For Radio Lovers do also tune in and join me on BRT Radio on Saturday  at 19.00pm for my programme Top Twenty which is compiled by DJ Bora and this show is repeated on Sunday at 15.00pm. We are transmitting this on 6.150 MH/z. Short-wave, 87.8 and 105 FM Stereo or tune click here

Cyprusscene.com was created in July 2012 and featured on BRTK shows

Cyprusscene.com was created in July 2012 and featured on BRTK shows

July 12, 2019
The  Soulist enjoyed a 2 day celebration for its 2nd anniversary

The  Soulist enjoyed a 2 day celebration for its 2nd anniversary

Mayhem does it again for Tulips at the Balti House, Esentepe

Mayhem does it again for Tulips at the Balti House, Esentepe

September 25, 2022
President Tatar: “The clock can no longer be turned back in Cyprus”

President Tatar: “The clock can no longer be turned back in Cyprus”

September 25, 2022
Youngsters make it a Happy Weekend for Esentepe.

Youngsters make it a Happy Weekend for Esentepe.

Susie’s Quiz results for 22nd September at the Diiva Restaurant