Margaret and I were delighted to return to the Dome Hotel, Kyrenia on 14th January 2015 to enjoy another opportunity of meeting the members of the  Rotary Club of Kyrenia Liman over dinner and also listen to a Guest Speaker Professor Ibrahim Benter the General Manager of

During his presentation to the members and guests of Rotary Club of Kyrenia Liman, Professor Dr. Ibrahim Benter spoke of his past work abroad and wanting to do more for his native land and when he returned to Northern Cyprus and joined the Vakiflar organisation. This organisation was founded in the Ottoman period in 1571 as a charitable organisation to whom people could donate their land which would then be managed to raise funds so that worthy causes and people could be helped with financial or material support in the future.

Vakiflar or Evkaf at one time held two thirds of the island’s land but since the island passed out of the Ottoman hands and into the British and other administrations control, this land holding has decreased to one third. Part of this land, as many people will know, is Maraş or Varoşa and Vakiflar accept that it is necessary to resolve such issues through negotiation and co-operation and agree suitable land compensation for land lost where appropriate.

When he joined Kıbrıs Vakiflar Administration in May 2013 he found that the charitable activities budget was 70,000TL and with urgent re-organisation this was increased in 2014 to 700,000TL which now helps them do so much more to help others. They have always had a responsibility of caring for ancient buildings and of these, both Christian churches and Muslim Mosques, are being cared for.

charities in Northern Cyprus and are looking to create stronger ties with these groups to co-ordinate and strengthen the impact of all charitable help being given back to the community.

Some of the charitable work being carried out is an amount of about 200,000TL for construction work for poor families to make their homes more habitable, also helping children with school clothing, taking care of the elderly in their homes, helping poor families who have a daughter getting married to provide the basic essentials for her married life, helping towards the care of street dogs and cats, there is also a soup kitchen established in Lefkosa so that children can get a hot meal and perhaps receive help with their school work. It is hoped that encouragement can be given to other charities to come together with Vakiflar to establish if further projects can be jointly organised.

For more information about Vakiflar click here and a profile of Professor Ibrahim Benter is shown below.

Ibrahim Benter was born in Lefkosa in 1962 and his parents came from Paphos. He studied in Turk Maarif College, and lived and studied in the USA between 1980-2000. During this time he graduated

from the Faculty of Chemistry at the University of Florida in 1985 and attended the Medical School in New York and received his PHd from Ohio State University in 1991.

He studied in Cleveland Clinic Foundation to become a specialist in Brain and Oncology Medicine and worked as a researcher in the Hypertension Department in Wake Forest University Medical School. In 1994 he worked as an assistant professor and associate professor at Memphis Tennessee University Medical School and received many prizes on several education and research subjects. His major discovery ‘angiontensin-(1-7)’ is being used for the treatment process for the patients with cancer, hypertension and heart diseases.

Between the years of 2001 and 2012 he worked as the Professor, Dean and in many administrative chambers in University of Kuwait School of Medicine Pharmacology Department. He worked in Oxford University during the 2012-2013 academic year. He worked together with Nobel Prize Winner John Vane and Professor Sir Martin Evans. His research subject is hypertension and the treatment of heart and coronary problems in diabetics.

He was involved in many other social, cultural and foundation related businesses apart from his academic career. He worked in many foundations in both Kuwait and USA and founded the Turkish

Cypriot Student Foundation in America in 1996 when he was still studying and communicated with many Cypriot students studying in all parts of USA and carried out many events which were helpful for the Cyprus Problem.

He ran lectures and events to help save the youth from bad habits such as drugs etc and gave tennis and science lessons to young people. He founded a foundation in Memphis and created a school and a sport centre which serves the local community there. He worked on programmes which helped the poor families about health issues and ran summer programmes in poor areas to help high school students to both work as a researcher and make money and to help them get a good science education so that they could get into good universities. He carried out many aid programmes for the poor in several countries in Middle East and Africa.

Wanting to do more for his native country he decided to return to Northern Cyprus and started working as the General Manager of Kıbrıs Vakiflar Administration in May 2013. 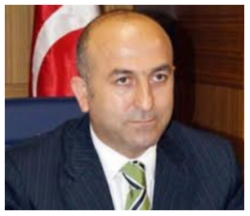