Gill, in the meantime, had been suffering her own problems, as she had developed a DVT and was on medication along with great pain in her leg.  This meant that Ivor had two patients to care for!

I want to go on record to say that Ivor did an excellent job caring for us both!

Gill and Ivor have three delightful pets! Sam is a beautiful big black dog, who is very keen to ensure that the passing tractors do not harm any of us, by barking and letting them know that he is protecting his home from them! Similarly he dislikes motor bikes, but luckily these intrusions to his outside world are few and far between! Apparently, when Lady joined the family, only five weeks ago, she was very frightened by Sam’s barking! BJ (named for Gill”s favourite singer Bon Jovi) is a typical cat and it’s only very recently that he has allowed Lady anywhere near him!

Lady was found abandoned at their local Tempo supermarket on Monday 27th June 2016 and Gill said to Ivor “If “he” (not realising “he” was actually a “she”!) is there tomorrow, I would like to take “him” home”.

The photo shows Gill, on Tuesday 28th June, giving the dog, as yet unnamed, a hug! Gill posted this photo on her Facebook page saying “I would like to introduce you to “LADY” She was dumped at Tempo in Esentepe, she has had her 1st checkup at Petline and is about 3 months old”

I met Lady for the first time on 11th July, she is a very happy puppy! I am an early riser and so each of the six mornings of my stay, I would go outside about 06.00 and be greeted very “bouncily” by Lady! She would soon settle down, sneaking inside when I went to get my coffee!

Their house has glorious views of the Mediterranean sea, with, for most of the time, a very cooling breeze blowing. Ivor told me that in the winter it can get very windy! They showed me their photos of the bare plot of land and the transformation into a magnificent garden is something they should both be very proud of achieving!

I am afraid with my MS and wearing my DVT stockings, walking around taking photos was not an option! 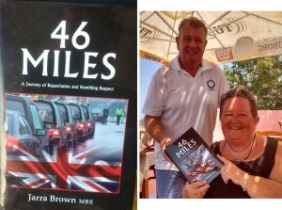 Jarra Brown MBE, the author of “46 Miles” giving me my signed copy

Jarra Brown MBE, the author of “46 Miles” is a good friend of theirs and I started to read this highly emotional book! Briefly it is the story of the town of Royal Wootton Bassett (it only achieved the “Royal” on Sunday 16 October 2011) and the incredible way they, and many others from around the country, greeted all the servicemen and women, who died in the wars in Iraq and Afghanistan, from 2005, on their way from the airfield at RAF Lyneham, the 46 miles, to their final destination of the John Radcliffe hospital in Oxford.

Anyway, it soon became apparent that I would need my own copy (£20 for the hardback version). We arranged to meet Jarra at the Fine Dining restaurant, when we went for our Sunday lunch.

Gill took these photos of the “new” me

After my fabulous week, we left at 12.15 and Ivor and Gill took me home, before Gill’s appointment with her doctor at 14.00. As I said to them, “I really enjoyed my holiday, but looking forward to getting back to my own home!”

My appointment with Dr Buğra was at 17.15, but as I was unsure of the address, I left in plenty of time! Hit rush hour! Even so found his clinic in plenty of time and relished sitting in his air-conditioned waiting room. He was slightly late, due to bad traffic!

Examination of my new breasts was greeted with delight by me, as for the first time I was able to see these two petite replacements for my humungous boobs!

My request to remove the DVT stockings was rejected, in a humourous way “I would rather you didn’t, because if you die from a thrombosis (blood clot), I don’t want you running to me to complain if I let you die”!!! I agreed, very rapidly, that I would keep them on as long as he felt they were necessary!!

However, my request for a beer was accepted! One a day! My first at Los Amigos that evening was like nectar from the gods!

I have slowly got back into my routine!

Visiting Supreme supermarket to restock my fridge with yoghurts, Ayran and loads of fruit! The compliments I received from various members of staff where a HUGE boost to my morale (not that it needed boosting!)

Lunching at The Happy Valley and seeing my friends at the Doğanköy Coffee shop in the evening, was again a wonderful experience, with those not “in-the know” expressing happiness for me. I am really blessed to have such wonderful friends around me!

Alesta and photo showing the old me at my PC!

Alesta was my restaurant of choice, where once again the compliments left me feeling very happy that I had definitely spent my money wisely!!

I sat in my corner and uploaded parts one and two of this “dream” ready for publication on 4th and 11th August 2016!!

My final appointment with Dr Buğra was at 16.30. He expressed surprise when he saw I was still wearing the DVT stockings “Many of my patients remove them”! Replied that I was ensuring no compliations could possibly arise!

He examined my tiny boobs and said that he was very happy with the results and that if I wanted in six months, or so, I could tattoo nipples on! To which my response was “Never!” cannot foresee a time when anyone would need to see my nipple-less boobs and feel the need to see nipples! Must be a man-thing!!

The weird thing was after two weeks of wearing the DVT stockings, even after they had been removed my legs still felt that they were still there! Once I got home, after a short WiFi stop (and a couple of Tuborgs) at Los Amigos, my shower was FANTASTIC! Remember, Denise telling me that her first shower was better than sex………….have to agree!

Dr Buğra told me not to swim in a chlorinated pool for another week and that he did not need to see me again, unless I have a problem, which neither of us forsee!

To summarise the price of my operation, blood tests, my taxi and the MRI scan, as shown in the table above, was just over two thousand pounds at a rate of four Turkish Lira to the UK Pound Sterling.

Would I recommend this operation?

Well, for me it was the right thing to do, but for a few acquaintances who have contacted me, I would say that you have to make that decision for yourself.

It is not the purpose of this blog to have everyone to start amputating their breasts! Apart from anything else there would probably be a mass protest from the male population!

No, the purpose of this blog was just to tell you my experiences and the way it related to me.

If this influences someone to have a similar operation I will just end by saying “the best of luck to you and hope that you are a happy with your result, as I am with mine!”