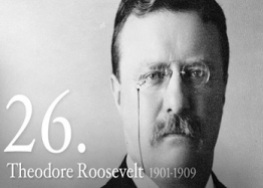 Theodore “T.R.” or “Teddie” Roosevelt, Jr. (October 27, 1858 – January 6, 1919) was an American politician, author, naturalist, explorer, and historian who served as the 26th President of the United States. He was a leader of the Republican Party and founder of the Progressive Party. He is noted for his exuberant personality, range of interests and achievements, and his leadership of the Progressive Movement, as well as his “cowboy” persona and robust masculinity. Born into a wealthy family in New York City, Roosevelt was a sickly child who suffered from asthma. To overcome his physical weakness, he embraced a strenuous life. He was home-schooled and became an eager student of nature. He attended Harvard University where he studied biology, boxed, and developed an interest in naval affairs. He entered politics in the New York State Legislature, determined to become a member of the ruling class. In 1881, one year out of Harvard, he was elected to the New York State Assembly, where he became a leader of the reform faction of the GOP. His book The Naval War of 1812 (1882) established him as a learned historian and writer.

Read more about “Teddie” Roosevelt in wikipedia by clicking here!