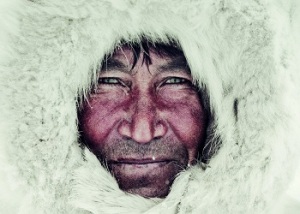 The Eskimo are the indigenous peoples who have traditionally inhabited the northern circumpolar region from eastern Siberia (Russia), across Alaska (United States), Canada, and Greenland.

The two main peoples known as “Eskimo” are: the Inuit of Canada, Northern Alaska (sub-group “Inupiat”), and Greenland; and the Yupik of eastern Siberia and Alaska.

Since the late 20th century, numerous indigenous people have viewed the use of the term “Eskimo” as offensive, because it has been used by people who discriminated against them or their forebears. In its linguistic origins, the word Eskimo comes from Innu-aimun (Montagnais) ‘ayas̆kimew’ meaning “a person who laces a snowshoe” and is related to ‘husky’, so does not have a direct pejorative meaning. In Canada and Greenland, the term “Eskimo” is seen as pejorative and has been widely replaced by the term “Inuit” or terms specific to a particular nation or community.