A Bavarian in India and Sri Lanka – Part 5 – Tea, Cricket, Beaches and the Leopard

A Bavarian in India and Sri Lanka – Part 5

For Part 3 – Kerala – Wildlife, Spices and the Backwaters – click here

Note: By clicking on the bold underlined links below you get more information!

After the wonderful experience in the elephant orphanage in Pinnawala the way led us south through lush green mountain landscapes, passing endless tea plantations, to Nuwara Eliya which in former times was also called Little England because British colonialists liked to withdraw from the summer heat at the coasts to the cooler climate of the mountains.

The area is also known as the most important region of the island for the cultivation of tea. So of course the visit to a tea factory was on the program, where a nice young lady explained in detail the production of tea from picking the leaves to packaging of the finished product. The factory tour befittingly ended with a good cup of tea.

A highlight on our itinerary, the accommodation in the famous Grand Hotel of Nuwara Eliya, should turn out to be a disappointment for me. I’m sure that fans of the colonial era love this place because much of the originality has been preserved and it still has the aura

of the time when it was the residence of the British Governor. For me the whole inside and outside of the building came with recollections of my boarding school and I do not associate this with good memories. Apart from the fact that our hotel rooms in terms of size and comfort were, to put it mildly, not in a modern state, it even haunted within the old walls! I am really not a believer in paranormal phenomena but how would you explain, for example, a bedside table that suddenly blocked the room door from inside, without being a single soul in the room? Or a pillow jumping (not falling!) nearby from a sofa in the deserted lounge?

Anyhow, after two nights in this spooky old building from the early 19th century we went on to an absolute highlight of our long journey, the Yala National Park.

The Cinnamon Wild hotel with its individual chalets in the jungle was the perfect setting for our very early morning planned jeep safari.

The National Park is known for its variety of wildlife and especially for the highest population of leopards in the whole of Asia. Nevertheless, it is to be regarded as a pure stroke of luck, when you get to actually see one of those beautiful shy hunters. We had this luck! The big wild cat, which was fortunately discovered by our experienced driver, was so engrossed watching a herd of grazing buffalo, and especially a young one as possible prey, that our presence did not seem to bother him very much. But this morning the leopard´s raid should not be successful for two reasons: First, a big buffalo slowly walked towards the predator seemingly fearless and fixed him with his eyes as if to say “don´t you dare do our child any harm!” and, secondly, more and more jeeps now turned up to catch this rare moment. Ultimately, the cat pulled back empty-handed and visibly sullen… 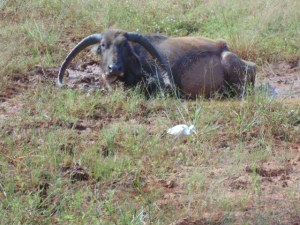 In addition to the leopard we got to see the other representatives of the “big five” of Sri Lanka: wild elephant, water buffalo, sloth bear and crocodile. Not to mention a lot of rare birds, a mongoose, and herds of different deer. What a great success! But when we all thought there is no more to see on that day, a handsome Sambar deer came along for an extensive drink at the hotel’s pool and directly in front of our chalet a herd of water buffalo and a family of wild boars showed up, obviously not taking note of a nearby dozing crocodile on the lakeshore.

Our journey slowly came to its end now. After visiting UNESCO world heritage site of Galle Fort in the very South of the island, we arrived at Unawatuna where we could enjoy the first days of rest on the beach of the Calamander Beach Resort.

By the way, the sprawling sandy beach of Unawatuna, formerly said to be one of the 12 best beaches worldwide, was totally destroyed by the disastrous Tsunami in December 2004 and completely restored in recent years by pumping sand from the open sea to the shore. Although the work is not yet completely finished, we saw a procession and ceremony of Buddhist monks who thanked Buddha for getting the beach back. In truth, it was more due to the skills of engineers from the Netherlands and the efforts of foreign and domestic workers!

The last tour of our trip showed us the largest and bustling city of Sri Lanka, Colombo. A city full of conflicting impressions, not only because of the mixture of different architectural styles – modern and posh constructions like skyscrapers, cultural centers and shopping malls next to old British colonial and oriental style buildings – you see visible wealth in stark contrast to slums in the suburbs.

Sports Club (SSC) at the end of the city tour. I must explain at this point that cricket is UK´s most appreciated sports besides football and rugby. The English and about a hundret other countries in the world love cricket, but Sri Lankans worship the sport like a religion. At every available free space on the island cricket is played and the SSC, home to the national cricket team, is regarded as a sanctuary. Thus, it was a great honour for us to be invited there, and an English sports fan in our group could hardly believe his luck and had, in his brief appreciation to the tour guide, tears in his eyes!

The last few days before flying back to Cyprus we spent at the beautiful beach of Negombo in the Jetwing Beach Hotel, an oasis under palm trees at a perfect miles long sandy beach, as I only knew from postcard images before…

All in all, an eventful and instructive tour through Kerala and Sri Lanka, which I really can recommend to all readers of this website

who have not yet visited this area of the world and might be looking for inspiration! Thanks for your attention and keep smiling!

P.S. Big Thanks to the organizer of the holiday, Mike Maternaghan and his brave partner “G” who made the whole trip either in a wheelchair or on crutches due to a broken ankle!

To view more pictures and a video about Yala National Park – click here!