A Bavarian in India and Sri Lanka – Part 4 – Temples, Fortresses and Elephants

A Bavarian in India and Sri Lanka – Part 4

For Part 3 – Kerala – Wildlife, Spices and the Backwaters – click here

Note: By clicking on the bold underlined links you get more information! 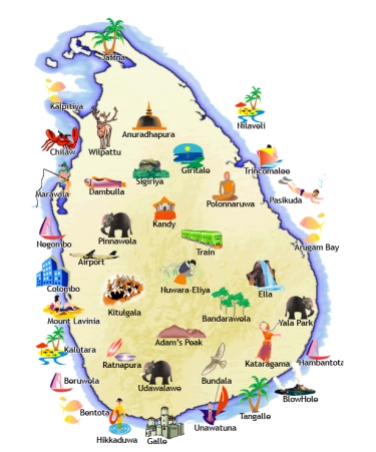 The flight from Kerala in southwest India to Colombo in Sri Lanka lasted little more than one hour and was a relaxing affair. Similarly, the immigration procedure at the airport. Although an ETA (Electronic Travel Authorization) for the journey to the former Ceylon is required in advance, the online questionnaire is, in contrast to the Indian one, to be filled in quickly and easily. The entry permit comes after a short time via email and qualifies for the visa-on-arrival at the entry point into the country.

One thing I noticed at once when we arrived. While the entry and exit in India is tedious and annoying, it was here apace without large queues and, above all, in contrast to the border officials in Kerala who were mostly rude and grumpy, we were greeted here with a smile! When the officer saw my German passport, he immediately began to put across his knowledge in German language and wished us all a nice stay in Sri Lanka! This kindness was to accompany us in all the days on this island in the Indian Ocean, Sri Lankans are extremely friendly and polite people.

Our subsequent bus trip to Habarana in the Central Highlands was less relaxed. To manage the distance of 230 kilometres (140 miles) it took us over 6 hours due to road works, because unlike in Europe, where such repairs are successively done in stages of a few kilometers, over there the old road surface is ripped out over the entire distance to be then (hopefully) replaced.

So, in the end it was again a nearly whole day trip to get to our next accommodation, the Cinnamon Lodge. But after a dinner and a couple of drinks the inconveniences were quickly forgotten…

Early the next morning it was time to go to our first sight in Sri Lanka, the temples of 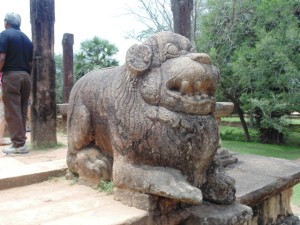 I must mention at this point that, since my time in the military, I never had to get up as early so often as on this trip! We therefore jokingly called it “boot camp”, but who wants to experience so many things in the shortest possible time must take this into account …

As in the previous parts of my travel report, I do not want to go too much into detail about all the places we saw, because the marked links will take you to detailed information if desired. 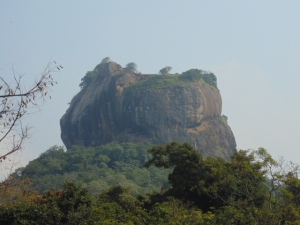 The next day, the route took us through an incredible landscape, mostly consisting of tropical woodlands, south to Kandy and we visited on the way the Rock Fortress of Sigiriya and the Dambulla Cave Temple.

In Sigiriya, as well as in other tourist spots on the island, we came across a typical local phenomenon. As soon as one is identifiable as a foreigner, which is not difficult, you are surrounded by locals who want either sell you something or offer their services e.g. as a personal guide. If you neither want one nor the other, you are well advised to get rid of these people politely but firmly. But this is usually short-lived, because around next corner already more of them are waiting.

Kandy, the second largest city of Sri Lanka after Colombo is absolutely worth seeing and the Cinnamon Citadel Hotel, beautifully located on the banks of a river, turned out as an oasis of rest after the exertions of the last few days.

After a tour through the incredibly beautiful Royal Botanical Gardens of the city, a popular place for local weddings, I cancelled the upcoming visit to the „Temple of the Tooth“ in which a tooth of Buddha is reportedly kept as a relic and the evening planned typical Kandyan dance show. Instead I made a city- and shopping tour with my girlfriend. After a tuk-tuk (motorized rickshaw) had brought us back to the hotel, we enjoyed a few hours relaxing at the pool.

The visit to the elephant orphanage in Pinnawala the following day, was another highlight of our trip for me.

Our explanatory happy tour guide told us that the livestock of wild elephants on the island was decimated from an original number of over 10,000 animals still in the early 20th century to less than 2,000 in the 1990s. And it was not because of ivory, as only about 2% of the Sri Lankan elephants, one of three recognized subspecies of the Asian elephant, carry tusks, but many animals were fatally injured by landmines during the 26-year lasting civil war on the island, which, thank God, was ended in 2009.

The elephant orphanage has taken care of many of either injured elephants or war orphans, and in addition thanks to some spacious wildlife reserves and the absolute prohibition on killing of elephants the stock has improved dramatically in recent years.

Observing these, unlike their African relatives, usually good-natured and easy to train pachyderms on the side of their carers (mahouts) during feeding and the subsequently shared bath in the river, is a spectacle that you will not easily forget.

The last part of my travelogue including the unforgettable visit to the Yala wildlife park follows next week.