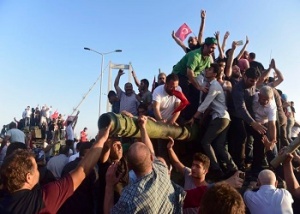 At least 90 people have died and 1154 people have been injured following last night’s attempted military coup d’etat and many were arrested for their role in the plot to overthrow the government.

The Turkish military last night released a statement saying they had taken control of the country in the name of democratic order, although the government said that the coup was organized by a minority group.

The military gave Turkish state broadcaster TRT a statement which confirmed a coup d’etat and that martial law had been imposed.

The statement said that the military action was in protest against the corruption in Turkey’s government that has infected the country’s democratic and secular rule, and that Turkey would now be ruled by a “peace council”.

As a faction in the army attempted to over throw the Turkish government, Prime Minister Binali Yıldırım said one of the generals behind the attempted coup had been killed in a statement televised on CNN Turk.

Erdoğan accused the faction of an attempt against the solidarity and unity of the country.The coup has been defeated, he said, because nothing is stronger than the national will.

Prior to Erdoğan’s arrival, Yıldırım said the situation in the country was now “largely under control.”……

Erdoğan and Yıldırım’s statements were in line with their earlier rejection of the army group’s claim that they had wrested control from the government.

The coup, said to be led by Fethullah Gülen, a US-based Muslim cleric and onetime associate of Erdoğan, began at approximately 10:30pm local time.

In an announcement read on TRT Haber, the military group accused the current government of thwarting democracy and secular rule of law in the nation.

They went on to call for a new constitution.

The group, referring to themselves as a “peace council” said they would instate a curfew and martial law, effective immediately.

Local and international media was soon inundated with reports that Istanbul’s two main bridges, the Bosphorous and Fatih Sultan Mehmet, were blocked by soldiers.

Confused residents were stranded on the roads of the nation’s largest city as several major roads were blocked and public transport came to a halt.

Hundreds of people could be seen lined up at ATMs on the streets of Istanbul as they tried to withdraw cash in preparation for what may come next.

Food stores in several neighborhoods were also said to be cleared out as residents stocked up on precautionary rations.

There were other reports of violence during the six-hour period where the government fought to wrest control from the group.

At least three explosions were reported in Istanbul and Ankara.

The parliament building, in the capital, Ankara, was the target of at least two explosions in the early morning hours of Saturday, Reuters reported.

In Istanbul, an explosion was heard in the vicinity of Ataturk International Airport, approximately an hour before the plane transporting Erdoğan landed. 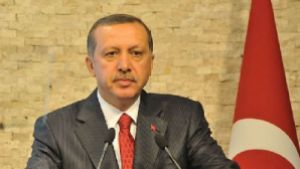 At least 1563 army personnel were detained across Turkey on Saturday, according to the country’s Interior ministry.

Parallel state military personnel including 5 generals, 29 colonels, have also been suspended by the Interior Minister.

A group within the Turkish military attempted an overthrow of the government, President Recep Tayyip Erdoğan said.

In the moments after the attempted coup began, Erdoğan urged Turks to “go to squares, let us give them the best answer.”

He delivered the message in a video from a cell phone that was broadcast on national television from what appeared to be a private residence.

Arriving in Istanbul hours later, the Turkish president said he would not leave Ataturk Airport until the situation in the country returns to normal.

“Turkish Airlines began its operations. There is a small distress in Ankara,” Erdoğan told a large crowd gathered at the airport.

“There is no leaving here until this situation goes back to normal. I will not leave, too,” he said.

Erdoğan slammed U.S.-based preacher Fetullah Gülen, who is accused of leading a terrorist organization and attempting to infiltrate and overthrow the democratically-elected government in Turkey.

“It is enough the betrayal you have done to this nation,” Erdoğan said, though not mentioning Gülen’s name, and called him to return to Turkey to face trial.

The office said the attempted overthrow has been repelled and that the situation is now under control.

Meanwhile, 20 other parallel state members who attempted to occupy state TV channel TRT have been detained by Turkish security forces. 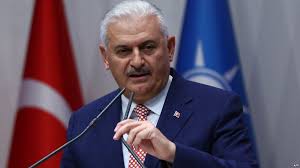 Turkish Prime Minister Binali Yıldırım made statements regarding the coup attempt in Turkey.

Yıldırım said democracy will win and added that those who were carried out a coup against the people would pay the highest price.

Turkish Prime Minister Binali Yıldırım said that the military were acting outside the chain of command and security forces are working to resolve the situation.

“The government elected by the people remains in charge. This government will only go when the people say so,” he remarked earlier.

Yıldırım insisted that the government remained in power, although unnamed military sources said that it had taken over for “democratic order”.

The Premier called on those who were carrying out the coup to give up on their efforts so that no more innocent lives would be lost.

The Premier said an extraordinary meeting of the Turkish Parliament will convene a 3 p.m. today.

“Parliament, the voice of national will, will give the necessary response,” he said while speaking on Turkey´s state news channel TRT.

President Mustafa Akıncı evaluated the attempted coup in Turkey and its repercussions to the Turkish Republic of Northern Cyprus to the BRT.

Akıncı said that the events that took place in Turkey were a particular concern to the TRNC and that they were following the events closely.

‘We are a country that has very close relations with Turkey. When good things happen in Turkey we too are happy but when bad things happen we get very concerned as a nation’ said the President.

Noting that in the past coups had taken place in Turkey and this had not assisted in Turkey’s progress, the President said that they were very concerned due to the new coup attempt in Turkey.

‘We hope that Turkey finds democracy within a democratic constitutional state under a civil administration. We know that a coup is not the solution. All problems can only be solved through democracy’ said President Akıncı.

He also said that he has been in contact with the Turkish Foreign Ministry and voiced his concern regarding the developments.

The President also informed the Turkish Cypriot people that in the TRNC there were no problems therefore people should not be concerned.

‘There are no problems at our borders. We have taken a variety of precautionary measures to prevent provocations’ he said adding that he spoke with the army corps and the Security Forces Commandership and they are continuing with their duties.

He said that no effects of the coup attempt had been felt in the TRNC and it has not affected its borders.

The President said that they were following the developments in Turkey and expressed the hope that Turkey will find solutions to its problems and solve it.

‘The only exit route is through democracy, through elections’ reiterated the President.